Caterpillars – are they cute? Are they gross? They jury’s out. Depending on who you ask, caterpillars are a delightful analogy for change, or they are tiny, hungry, fuzzy monsters. If you’re a gardener and not a 1st grader, you might have a distaste for these crawling insects, but the truth is that, generally, caterpillars are actually beneficial bugs. There are many different species of caterpillars that are common here in Alberta, with similar behaviours. We’ll also touch on Leafrollers and tent caterpillars, which have some distinct behaviours. Though each have different identifying characteristics, their impact on plant material is generally the same.

Although they munch on plants, or use leaves as shelter for their cocoon, the damage is usually minimal. In time, caterpillars transform into moths and butterflies, which act as important pollinators. Plus, all the beautiful birds that YOU love to watch, love the caterpillars in your garden. So really, everybody wins.

When a gregarious group of caterpillars ends up collecting on one plant, things can get ‘hairy.’ Though one caterpillar munching away isn’t going to hurt a plant, an army of them can strip branches quickly (yep, “army” is the correct and slightly menacing term for describing a collective group of caterpillars). In some cases (like in a vegetable garden), just one or two caterpillars can be a problem, snacking on YOUR SNACKS before you’ve had a chance to harvest.

In addition, an army of caterpillars can have other collective behaviours that can cause damage. For example, a group of tent caterpillars will construct ‘tents’ around entire branches (or even entire plants) out of fine silk webbing, as a way to capture heat from the sun to help regulate their body temperatures. Leafroller caterpillars use their silk webbing to roll leaves up to create a protective nest for themselves, where they can eat away at leaf tissue without threat of predators, often pulling more leaves together as they progress. Leafrollers usually prefer to ‘roll single’, but if too many of them choose the same tree or shrub, the resulting defoliation can stress the tree.

Where & When You’ll Find Them 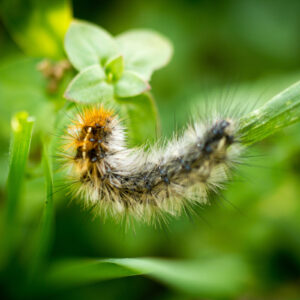 Moths and butterflies will lay their eggs on tree bark and leaves, so when the little caterpillars hatch in the spring, they can begin munching right away. You may begin to notice caterpillars in the early spring, and throughout the summer. Their most active months (when we notice the most damage) is typically from spring to mid-summer (April to June). As we approach the later summer months (late July/August), many caterpillars will be cocooning against a branch, under a leaf, or in their nest, and will no longer be active.

How They Impact Your Plants

Caterpillars feed on the leaf tissue of a great variety of plants, as well as some fruits and vegetables. As it feeds, a single caterpillar can strip a handful of leaves before moving on – which isn’t a big deal for a large tree, but can be more problematic for a much smaller plant. If caterpillars

take a liking to your leafy greens or your apple tree, they may not impact the plant, but they can impact harvest yields.

Other behaviours like tenting or leaf rolling (as described above) can inhibit your plants ability to perform critical leaf functions, like consume sunlight.

Caterpillars are common, and you’re likely to find several hiding in your trees, shrubs and garden every year. Plants are made for living with bugs like caterpillars, and usually aren’t adversely affected by small populations. However, it may be time to take action if you notice major damage happening (like an entire branch being stripped of its leaves), or the plant begins to look stressed (turning yellow, wilting, pushing out deformed growth). In your vegetable garden, you may even 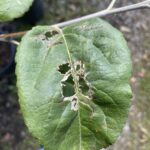 An example of old caterpillar damage.

want to take proactive steps to avoid dealing with caterpillars in your harvest at all.

Caterpillars will leave behind leaves that have been stripped of their green tissue, perhaps left with a few pieces of their veiny skeleton. Holes or bite marks in a leaf may be evidence of a caterpillar that snacked in passing – look a little closer, and you may find the perpetrator elsewhere on the plant. Caterpillars will commonly eat and move on, so if you notice some caterpillar damage, but no wiggly friends, it’s very possible that you no longer need to worry.

Caterpillars vary widely in colour, and many of them are well camouflaged to the plants they

An example of fresh caterpillar damage

frequent. If you look closely, you may spot them crawling along branches, or on the tops or underside of leaves. Tent Caterpillars are easily identifiable by their black and yellow markings, and hairy bodies. Though leafrollers can be green, yellow, white, or brown, their dead giveaway is the rolled-up leaf nests you’ll find scattered among the leaves of your plant.

How to Deal With Caterpillars of Any Kind

Pick ‘Em and Squish ‘Em: If you’ve noticed a handful of wormy culprits on your plant, the quickest, easiest and most relevant solution is simple: pick them off the plant and squish ‘em.

Prune Carrier Branches: If your plant is hosting a whole caterpillar community, it may be best to prune the carrier branches and dispose of them, taking the infestation with them. In some cases, a gardener may prune a perennial or shrub right back to the ground if the infestation is bad enough – plants will grow back!

Diatomaceous Earth: This one’s for the vegetable gardeners! This completely organic solution is 100% safe for your edibles, and is a great proactive measure to take against caterpillars, worms, and other crawlers. This powder is made from fossilized remains of diatoms (containing silica). Just take care not to inhale the dust when you apply (you don’t want silica in your lungs!). D.E. causes micro-abrasions in the on an insects body, which causes water loss, leading to fatal dehydration. To apply, just layer the powder along the soil, on your plants, and any other horizontal areas where the caterpillars may choose to travel. The powder must be visible to be working, so reapply after rain or heavy wind.

BTK (Bacillus Thuringiensis Kurstaki): Completely natural, this is a great biological control method for caterpillars. This microscopic bacteria is parasitic to a caterpillar host. When sprayed on the foliage of a plant, it will be consumed by any present caterpillars, and usually causes them to stop feeding within hours, and die within days. BTK only thrives when it has a host, so it’s best to use this method once you’ve noticed the presence of caterpillars.

Ambush: We recommend this chemical method only if nothing else works. Ambush is an insecticide specifically designed to target caterpillars, but it does destroy almost every other bug it comes in contact with, as well. Use Ambush only when necessary, as it does kill beneficial bugs.

What About Other Bugs?

Check out our full bug series here, and follow us on Facebook to get notified as we release new articles in the series!

from → Bugs, How To's, Plant Troubles