Bug Series: How to Deal with (Common) Leafminers

Common in most North American climates, there are a great variety of leafminers species that feed on everything from prairie-hardy trees & shrubs, to the edible leaves of your fruits and vegetables. Though the damage left behind by these pests is easy to identify, the bugs are not. Maturing as small, non-descript black flies, leaf miners are always around and usually don’t cause a great deal of trouble.

Like their relative, the birch leaf miner, common leafminers don’t play a particularly positive role in the ecosystem from people’s perspective. As with most bugs, they do provide an important source of food for other insects or birds.

Leafminer adults lay their eggs inside the leaf tissues of their chosen plant, and when those eggs hatch into larvae, they spend 2-3 weeks staying cozy and protected between the outer layers of the leaf, where they have plenty of leaf matter to munch on. The cosmetic damage left behind by these trailblazing larvae is unsightly, but unless they have infested a great majority of your plant, they won’t kill or seriously harm the plant. It’s true that plants significantly covered in leafminers are potentially weakened or harmed, common leafminers aren’t usually prolific enough in Alberta for this type of infestation to be common.

Where & When You’ll Find Them

While each species of leafminer varies slightly in it’s lifecycle, most species move from egg to adult in just 6-8 weeks – meaning that it’s possible to see multiple generations within a summer. After 2-3 weeks of bountiful feasting on your plant, leafminer larvae drop from their leaf into the soil below, where they become adult flies within only a few weeks. Subsequently, they’ll choose a nearby plant to lay eggs on, and the cycle begins again. Leafminers can overwinter in the soil, so it’s common to begin noticing leafminer damage as soon as a few weeks into the spring, and throughout the length of the summer.

Because the larvae are tiny, you’re likely to notice the leaf damage after a leafminer has completed their larvae cycle on your plants. If you pay close attention in the spring, you may catch some in action.

How They Impact Your Plants

The damage caused by these tiny pests is usually just cosmetic and shouldn’t impact the overall health of the plant. A damaged leaf here and there is nothing to worry about, however, if you begin to notice a significant number of leaves on your plant have been damaged, it may be time to take action and prevent further weakening of your plant. 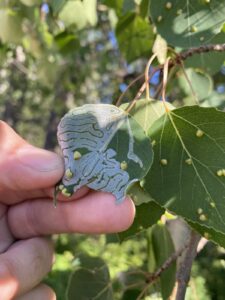 The trails of a leafminer larvae covering the majority of a leaf (gall also shown on this leaf, caused by other ailments).

Leafminers leave behind unmistakeable ‘trails’ or ‘squiggles’ of dead tissue on a leaf, usually covering a significant amount of that particular leaf’s tissue.

How to Deal With Leafminer

Once the larvae have hatched inside the leaf tissue, they are well protected and hard to combat. Your best bet in preventing significant leafminer damage is to be proactive.

Water & Fertilize Your Plants: The best thing you can do for a plant with leafminer is water and fertilize. Your plants have their own natural bug defenses, and if they are healthy and happy they are more likely to fight off infestations before they start. Plus, if your plant does end up with leafminers, new plant growth will help dilute the effects.

Beneficial Nematodes: This is a great proactive remedy that can be used to combat a number of different insect pest – bonus points for the fact that it is completely organic and doesn’t harm other beneficial bugs (such as ladybugs and bees). Nematodes are microscopic worms that will feed on harmful larvae, deterring them from the surrounding environment. Nematodes are found in thousands of different varieties so you’ll want to get the specific type that feeds on larvae like leafminers. This remedy is most effective as a proactive measure (spray on your garden, plants and trees in the springtime). Pot Poppers for Gnat & Thrip control should also work to control leafminer larvae.

Insecticidal Soap: It’s important to note that this particular solution is only effective if used at just the right time. Insecticidal soaps are only effective when they come in contact with the insect, so you’ve got to catch this ‘buggers’ when they’re vulnerable. In early spring, watch for black flies that seem to be landing and lingering on your plants. If you’re noticing a trend, you can use something like End All or Safer’s Insecticidal Soap to coat your plant every 2 to 3 days for about a week or two. The idea is to spray any flies that may on your plant, and any eggs that might be hatching and emerging from that leaf within that same period of time. You probably won’t wipe out every single leafminer, but you may be able to wipe out a good chunk of them.

What About Other Bugs?

Check out our full bug series here, and follow us on Facebook to get notified as we release new articles in the series!